These are pieces I made some years ago. The first is a sort of sign for what I do, cut in limestone and coloured.

The next is a simple stone bench. It was made from limestone with slate insets. The text is from TS Eliot. The channel was filed with copper leaf and patinated, something which became a signature item for pieces I make.

Here we start with the O – the most basic of the capitals, and probably the hardest both to draw and carve. Symmetry is the key here – although there are many other ways to draw an O, some of which will be recorded in future blogs. Anyhow, to get started with the classic Trajan O please refer to the illustration. (Click to enlarge). 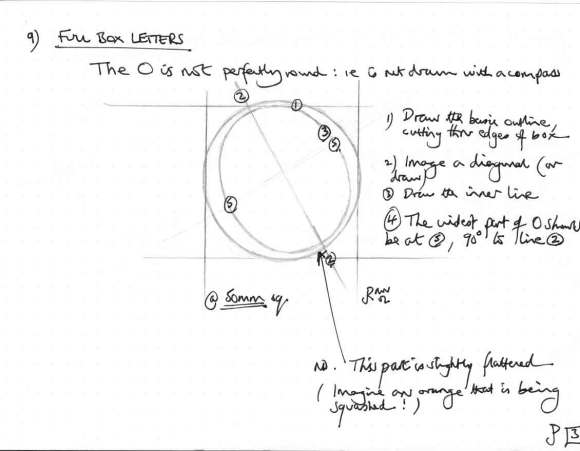 Another image from the Modern Typography number of the Monotype Recorder:

I have been giving some thought today on this man, the person who, it is only fair to say, introduced a revolution into the British commercial scene in 1933.

He was genuinely a Revolutionary, despite his bowler hat.

He seems, individually, to have started the concept of Brand.

I quote from the article published in the Monotype Recorder.

‘The London and North Eastern Railway, in 1929, had become what it had taken nearly a century to become, namely a centralized system of transportation. The green livery on locomotives leaving King’s Cross reminded passengers in Edinburgh that there was such a thing as the L.N.E.R. not such separate things as the Great Northern, North British, and the rest. A series of renowned posters brought out under the direction of Mr. W.M. Teasdale, had brought this group personality of the line into the public conscience to some extent. Mr Teasdale was called to Westminster [my note – why?], and Mr. C.G.G. Dandridge took his place as advertising manager, after a brilliant success in Manchester which made effective use of direct mail….Mr Dandridge turned his attention to a field for improvement, namely, typographic reform…

‘Mr Dandridge realized what not every advertising manager had the wit to realize, namely that the choice of a good type face is the very heart and soul of typographic reform…’

The article fails to mention how Mr Dandridge came across Gill.

I will publish the full article in a separate post.

If anyone has information about Mr Dandridge please come forward now or forever hold your peace.

The alphabet can be divided into three elements corresponding of the width of each letter.

The three elements are:

Note: The letters M and W fall slightly outside these parameters.

Cover of Monoype Recorder of 1933, set in Gill sans.

(Please clip on image to enlarge.)

note – all items shown are from my collection of printed material.

This comes from my copy of The Monotype Recorder, a magazine published by the Monotype Corporation, of Winter 1933. It is sub-titled ‘Modern Typography Number’

It shows Gill standing in front of the Flying Scotsman steam train. Enjoy.

(I would love to know whatever happened to Mr C.G.G. Dandridge, the advertising manager, seen right, who ‘initiated the reform’ [of the typefaces] – how did he know Gill? Was he a visionary in his own right?)

I have been going through some of those Penrose volumes on my bookshelves. Came across these images in the 1954 volume.

These are reproductions of the original drawings for the Spectrum typeface designed by Jan van Krimpen, a distinguished typographer based in the Netherlands. It was designed for use in a Bible, being named after the company that commissioned the face – the Spectrum Publishing Company of Utrecht and Brussels.

According to the author of the accompanying article, John Dreyfus, at the time assistant University printer at Cambridge (and later succeeding Stanley Morison as advisor to Monotype – another story, another blog), Spectrum – which was van Krimpen’s last design – has a generous x-height, with narrow capitals and a ‘remarkable compression of the italic’.

What do I think some 50 years on? The upper case C is odd , as is the G naturally, both ungainly, I hate the Z and the Q, and particularly the ‘crossed swords’ of the W. All in all not a hit with me. (Did I mention the Q? Ugh!)

Here are some thoughts on how to approach hand lettering, taken from a guide I produced  for my students. This is the first page in a series, which will demonstrate basic techniques. Please subscribe to the feed to be alerted to updates on the site.

Contemporary stone lettering is generally based on, and adapted from, a script used by the Romans and known as Trajan.

It is believed this letterform was first painted on to the surface of the stone with a brush.

The same craftsman, or another, would then have carved the painted inscription with a mallet and chisel.

Today, letter carvers first draw the inscription on paper and only after having resolved problems with letter shape and spacing will then transfer the design to stone.

It is important to be able to draw a letter with pencil on paper at full size to understand the dynamics and proportions of each letter.

Note – the line illustration is taken from The Origin of the Serif, by Edward Catich, 2nd edition, 1991. This is the primary source for those wanting to know more about the traditional Roman letter form.

The other illustration is my own.

These are some additional photographs I took, using a Pentax ME Super with, I think, an Ilford HP5 black and white film. The first picture shows the house itself, an imposing property with plenty of outbuildings where Gill and his assistants worked. The next is a snap of an old plaque fixed to brickwork. I have no idea who carved it or what it says. Finally, a photo taken at the end of my visit that day to the churchyard at Speen nearby, showing Gill’s grave, with a footstone marking that of his wife, Mary. 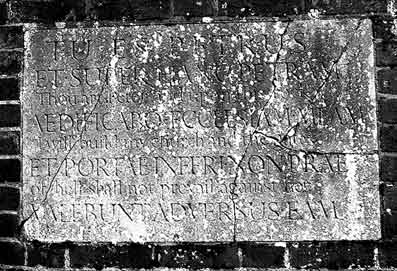