TE Lawrence is (or perhaps) was an icon of Englishness – the world has moved on. The David Lean film in which Lawrence was played by Peter O’Toole (no finer role) claimed him as a legend, and I grew up thinking so. (I’m surprised that the film came out in 1962 when I was 5, so I must have seen it much later – it still haunts me.)

I collected Lawrence books as a teenager, and still have this Odyssey, though others have since gone in various house moves.

I never read the Seven Pillars… (who can claim with honest heart they have?) and always hankered after a copy of Crusader Castles. Being once an archaeologist I had romantic dreams of retracing Lawrence’s steps through Arabia – not that I was ever much interested in Middle Eastern art or archaeology.

Reading Rogers’s Paragraphs on Printing (Dover reprint, 1979) the other week I chanced across some information about the first Lawrence Odyssey. This was initiated by Rogers, used Centaur, of course, and took nearly four years to complete.

Rogers writes that the ink was specially made: ‘I had an ink made from an old formula I found in Savage’s Decorative Printing, which called for balsam of copaiba instead of varnish. It was somewhat slow in drying, but has still a pleasant spicy aroma on which many people have commented on opening the book.’ This edition came out in 1932. 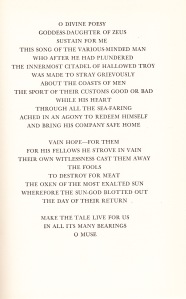 My edition is the first UK trade of 1935, though printed in the US.