To those who have subscribed under All About Lettering, an explanation.

All About Lettering has been extant 10 years – the anniversary was November 2020. In that time I published more than 350 posts on lettering related themes. These remain.

However, as I stated at the start of this year [2021] I am eager to explore other areas. I have therefore taken the decision to rename the site All About Creativity, which expresses where I am now.

I hope you will continue to follow, but understand if this change of direction is not what you are after. Take care and thank you for your interest.

To new subscribers of this blog.

Do browse the historic posts on lettering and other typographic related areas. You may find something of interest.

How often do you draw an O? How often in this age of keyboards do you pick up a pen, pencil or brush and draw an O? How often do you give thought to the creation of an O? Here are some of mine. Now, these are not necessarily an O – yes it is a circle but an O is more than that. An O has style and grace, and is not a pure mathematical or geometrical ‘form’. Nevertheless…without more ado here is my [rather primitive] selection

Why this interest in O? It comes from having picked up Vasari’s Lives of the Artists [Penguin Classics, 1965 (reprinted 1976), trans. George Bull] who describes the artist Giotto picking up his brush when asked for a sample to give to the Pope. This is the relevant section – ‘The courtier told Giotto for a drawing which he could send to his holiness. At this Giotto, who was a very courteous man, took a sheet of paper and a brush dipped in red, closed his arm to his side, so as to make a sort of compass of it, and then with a twist of his hand drew such a perfect circle that it was a marvel to see. Then, with a smile, he said to the courtier: ‘There’s your drawing.’ As if he were being ridiculed, the courtier replied: “Is this the only drawing I’m to have?’ ‘It’s more than enough,’ answered Giotto.” [p.64.]

Well, the Pope saw the O and was mightily impressed and Giotto got the commission. Vasari continues: ‘And when the story became generally known, it gave rise to the saying which is still used to describe stupid people: ‘You are more simple that Giotto’s O.’ This is a splendid witticism, not only because of the circumstances which gave rise to it but also because of the pun it contains, the Tuscan word tondo meaning both a perfect circle and also a slow-witted simpleton.’ [p.65.]

As an encore, here is an O from the Rev. Catich’s The Art of the Serif:

Isn’t that so beautiful? How about we all take time out to draw some O’s?

Lettering comes in many forms, none more important surely than street signage that direct people. And within street signage comes texts literally written on to the road to advise motorists of, well, in this case speed.

I do not doubt that the Australian Government has a code on street typography. Do they have one on legibility? Notice how this sign is being eroded by nature.

And see this earlier post as it looks as if the piece was given a paint job.

Take a look at this piece of suburban street lettering, taken in Australia in the past few weeks. It is of a kind that can be found almost anywhere.

This is lettering at its earthiest, lettering that has withstood frequent potholes and a motorist doing a wheelie. Yet the message remains: this is a 40km/h zone.

In reviving a ‘tradition’ that was first launched in 2012 (see here), may I first of all wish those loyal, and new, readers a safe, relaxing, enjoyable and stress-free (is that possible?) holiday season wherever you may be. Take time out and take time to reflect.

Okay – here is the photo: can you name what this is and what machine it belongs to? There is no prize – just the quiet adulation that comes from being one of the few able to recall pre-digital technology (now, that was a clue). I will give the answer to those suffering sleepless nights in the first week of January 2016. And – no Googling. Not that it will do you any good mind.

A friend from London, UK, writes: “I noticed Station number X had a pair of dice (the Romans were gambling for Christ’s clothes) but that Gill did not have the correct configuration of the numbers on the die. Gill did not know that the opposite sides of the dice always add up to seven. Five is opposite to two, six is opposite to one, and four is opposite three. Ooops. The curse of the sub-editor strikes again.”

I was recently contacted by a guy seeking some initial tuition in learning how to letter-carve. As I was nearby I called in to see him and ran through a few basics. As I was there I realised how important it is to master the following:

Happy to answer questions – and also browse the blog for other entries on letter-carving.

Adrian Frutiger passed this life on 10 September 2015. Read here for an obituary.

I previously wrote about Frutiger here.

In his Signs and Symbols he writes of the value of ‘interior and intermediary space’.

Designers take especial note. ‘The beauty of a sign,’ he writes, ‘is often the result of a struggle between the resistance of the material and its conquest by the instrument…By contrast, the Oriental way of thought and expression…puts the creative act more into the mastery of a gesture with which the brush lays the sign on paper’. [Studio Editions, London, 1989, p.101.)

Images from my week. These were taken in Brisbane, Australia. The first at a train station – a nice display of cast letters (heavily covered in paint – be great to see that taken away and the true letters revealed once more) representing Queensland Rail and used as a brace for a seat; the second a metal plate in the road covering services – lovely use of the cross bar in the capital A as a functional element for inserting the rod that will remove the cover for inspection; the third some quirky figures (‘biffo man’) at pedestrian crossing. Great to see such inventiveness.

In Brisbane, Australia, last weekend. Having parked the car in an underground park on the South Bank (this information strictly for those who know Brisbane – a wonderful city with a thriving arts culture – so definitely worth a visit when you are over this way [this is not a paid for advert by the way] ) I notice this sculpture.

I am drawn, of course, by the lettering cut into  the surface I assume by a welding torch. The piece is tucked away in this location and really does need to breathe in the open air – this would also assist with trying to read the inscription, which, as you can see, is long. 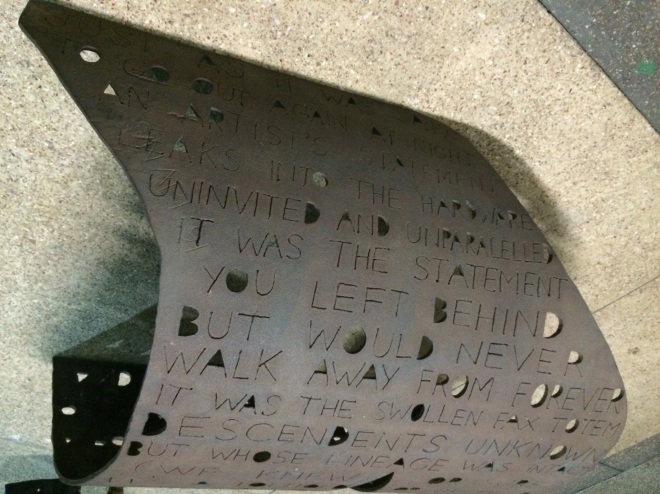 I made out the words printing press. Thank you Mr Snape. But no thanks to the municipal authorities or whoever for, having presumably commissioned such a piece, gave it the insult of this subterranean setting. For more on Michael Snape click Michael Snape